Throughout history, women have been held responsible for upholding family ‘honour’ – with deadly consequences.
Source: Jazerah

When 50-year-old Phil lived on the streets of Melbourne he would sleep on traffic islands as they felt safer.
Source: Jazerah

The people feel stuck between a corrupt government and a brutal, violent, oppressive Taliban that is gaining ground.
Source: Jazerah

Ben & Jerry’s co-founders have pushed back against claims of anti-Semitism following the company’s decision to stop offering its ice cream products in Israeli-occupied Palestinian territories, noting that they themselves are Jews.

Writing in the New York Times, Bennett Cohen and Jerry Greenfield said they were “proud Jews” who view Israel’s occupation of the West Bank as a barrier to peace.

“It’s possible to support Israel and oppose some of its policies, just as we’ve opposed policies of the US government. As such, we unequivocally support the decision of the company to end business in the occupied territories, which a majority of the international community, including the United Nations, has deemed an illegal occupation,” they argued, in an op-ed published on Wednesday.

The move to pull Ben & Jerry’s from shelves in Israeli-occupied territories was in keeping with the firm’s “progressive values.”

The iconic ice cream duo noted that, while they no longer have operational control of the company, they nonetheless felt that the boycott was “one of the most important decisions” that the firm has made in its more than 40-year history.

The co-founders also wanted to make it absolutely clear that they didn’t hate Jews. “That we support the company’s decision is not a contradiction nor is it anti-Semitic,” Cohen and Greenfield wrote. On the contrary, the boycott is in support of justice and human rights, “core tenets of Judaism.”

My sixty-second rant tonight on @MSNBC was about Ben & Jerry's ice cream, the occupation, apartheid, and illegal settlements.

Make sure you watch till the end

The op-ed comes amid ongoing uproar over the ice cream embargo. Earlier this week, reports emerged that an Israel Defense Forces soldier was attempting to sue Ben & Jerry’s, arguing that he had been unfairly deprived of his “preferred” dessert.

Prime Minister Naftali Bennett was also distraught over the ice cream embargo, and claimed that that Ben & Jerry’s had rebranded as an “antisemitic ice cream.”

The Vermont-based ice cream brand, which has developed a reputation over the years as a champion of progressive causes, announced in July that it would be “inconsistent” with its values to sell its ice cream in occupied territories in Gaza and the West Bank.

Palestinian government workers and volunteers began the process of removing rubble and cleaning debris resulting from an explosion that rocked an old market in Gaza City last Thursday.

The massive explosion in the historic Al-Zawiya market had reportedly killed one Palestinian and wounded ten others. The causes of the blast, according to a spokesperson for Gaza’s Ministry of Interior, Eyad al-Bazam, remain unknown. 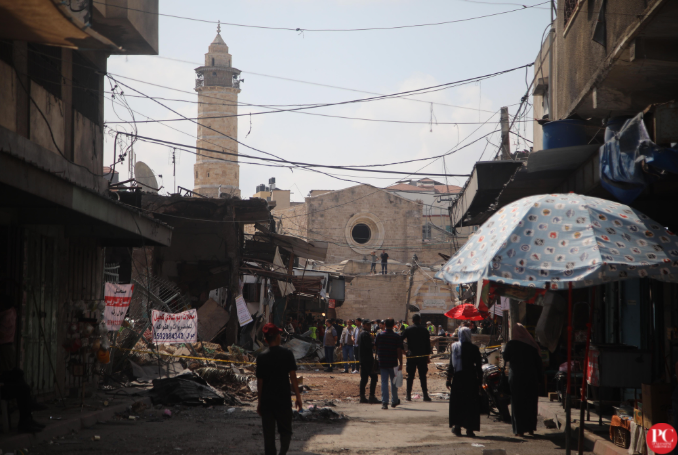 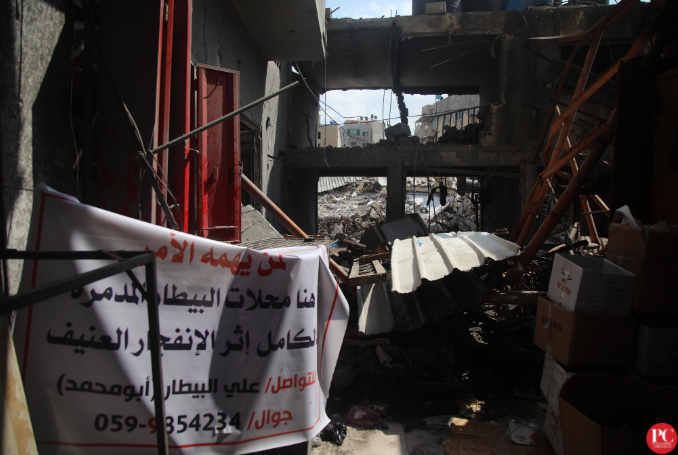 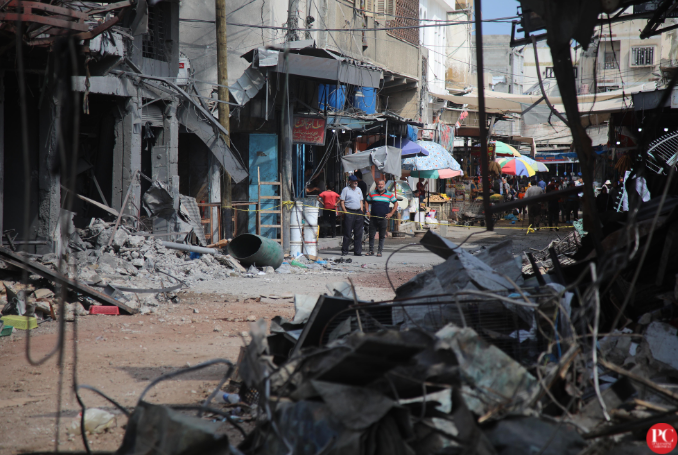 The explosion took place in a multiple-story building, resulting in the collapse of the residential structure and serious damages to homes and businesses throughout the area. 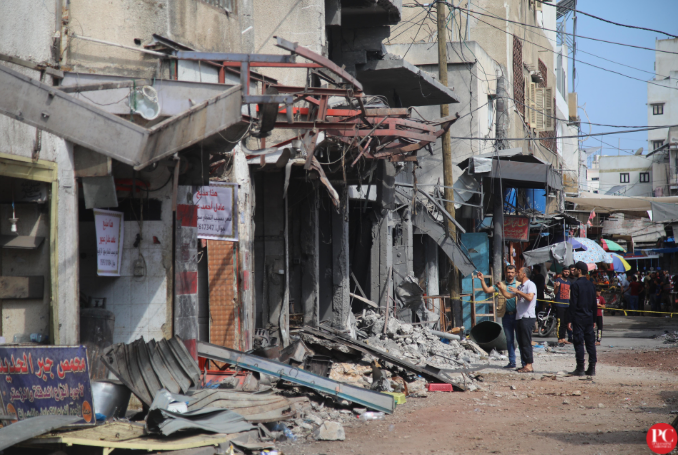 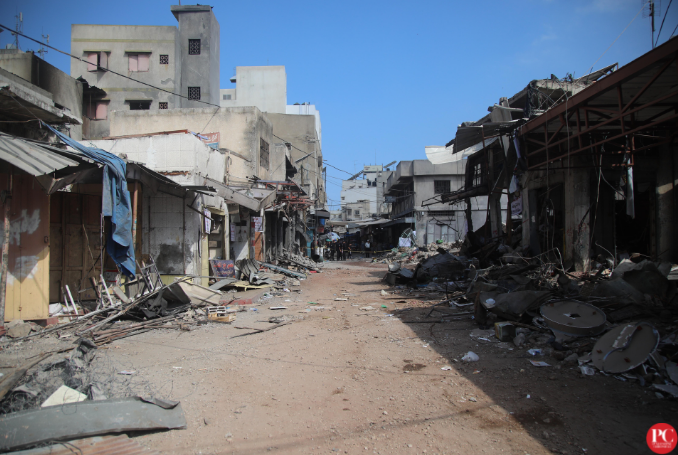 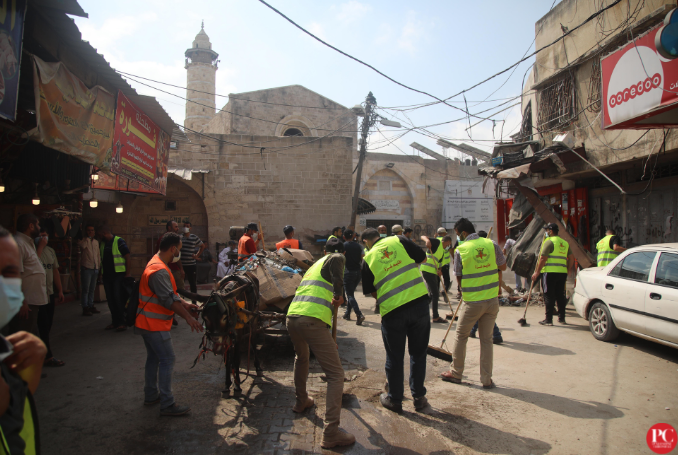 “I woke up at the sound of the explosion,” Mohammed al-Tabatibi, a Gaza resident, said, adding, “I left my house and I saw people running, smoke was everywhere and many houses and shops were destroyed. Explosions never take a break in Gaza, even during holidays.” 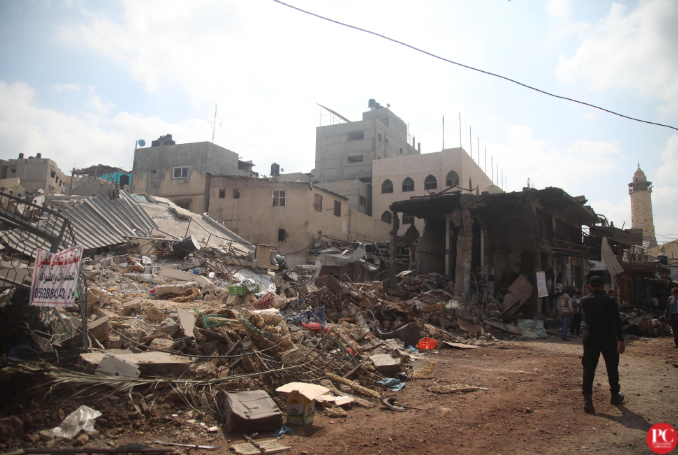 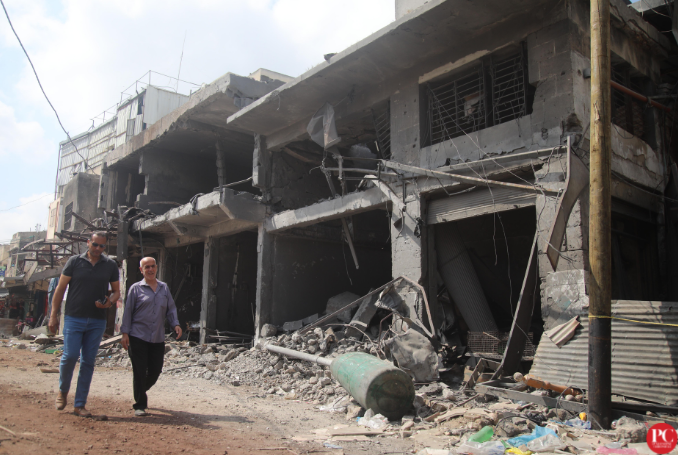 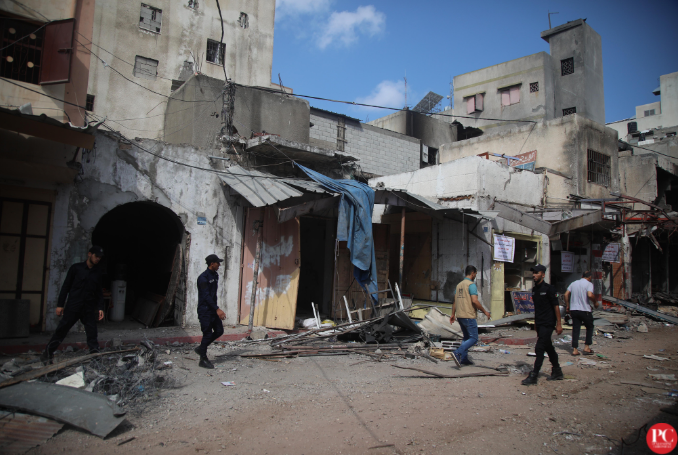 Last year, 25 Palestinians were killed and scores of others wounded as a result of a massive fire, which itself resulted from a gas leak in a popular market in the Nuseirat refugee camp, in the central Gaza Strip.

As Mexico’s reservoirs run dry, the people stuck on the drying lake beds wonder how they will survive.
Source: Jazerah

Fractional or lower dosing has been used around the world for years as a means to overcome vaccine shortages.
Source: Jazerah

Algerian judoka Fethi Nourine has reportedly withdrawn from the Tokyo Olympics before competing after the draw set him on course for a possible match-up against an Israeli opponent.

Nourine was set to face Sudanese judoka Mohamed Abdalrasool on Monday for his first bout, and would have taken on Israeli Tohar Butbul in the next round.

Speaking to an Algerian television station late Thursday, Nourine said his political support for the Palestinian cause made it impossible for him to compete against an Israeli.

Algeria’s champion, 3 times Africa Champion and world ranked as 31st in Judo, NOURINE FETHI; withdrew from Olympic Games in Tokyo, Japan, because he was expected to fight a Colonist from Apartheid Israel. He said “this is our duty to the cause of Palestine, which is above all.” pic.twitter.com/3w9QU67H0S

“We worked a lot to reach the Olympics… but the Palestinian cause is bigger than all of this,” he said, adding that his decision was “final”.

It is not the first time that Nourine has withdrawn from competition to avoid facing an Israeli opponent, after he pulled out of the 2019 world championships in Tokyo.

Best of luck to the 44 athletes representing Algeria at #Tokyo2020. Algeria will participate at 14 different sports at the #Olympics, including the 1500m legend Taoufik Makhloufi. pic.twitter.com/QGeVzUk7ni

This is not the first time that an Arab or a Muslim athlete pulls out of an international competition to avoid meeting an Israeli opponent, for such participations are seen as acts of political normalization with Israel, an occupying power that is growingly recognized as an apartheid state.

Palestinian artist Bilal Khaled is not only famous in Gaza for his outstanding  Arabic calligraphy skills but worldwide as well. News of his accomplishments has been featured in The New York Times, The Guardian, Reuters, Agency France Presse, among many other media.

But despite his fame, Khaled, 28, remains committed to his roots. He sees himself first and foremost as a Palestinian artist from Gaza as he insists on living his mark on the walls of the Gaza Strip. 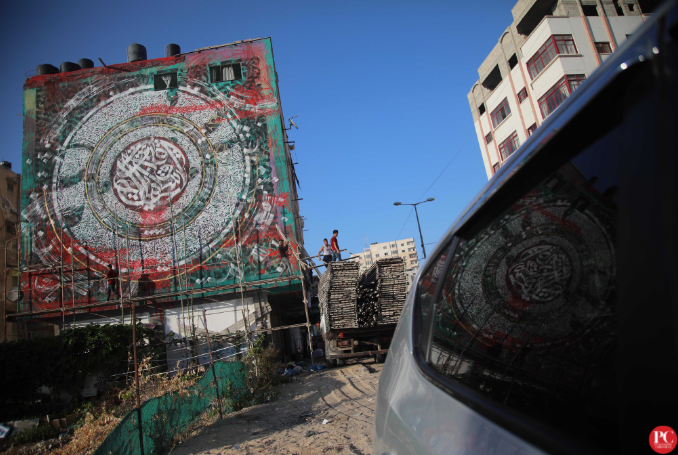 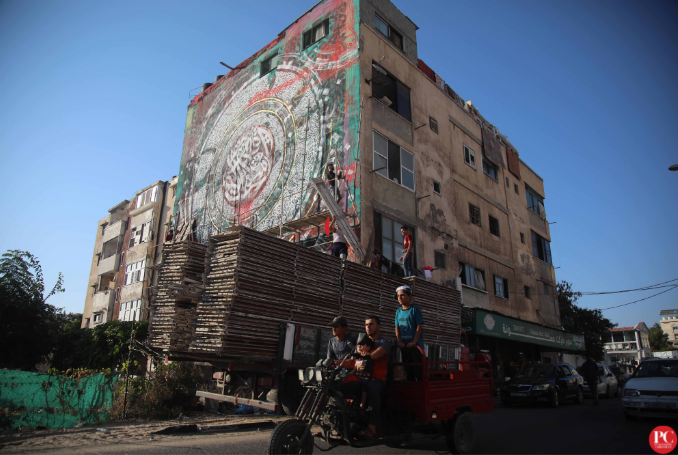 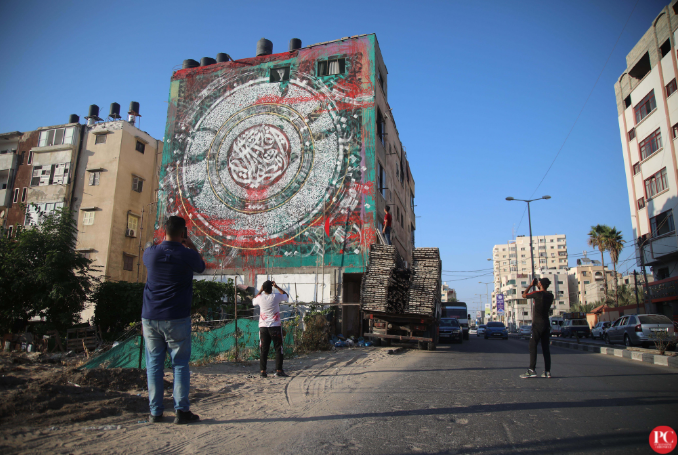 Khaled has combined two different styles, that of Arabic calligraphy and street graffiti into one. He even founded a Gaza graffiti society of like-minded artists in Gaza and throughout Palestine. 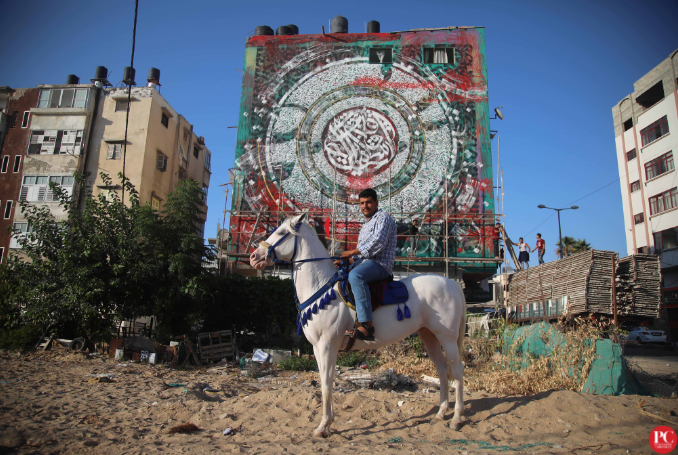 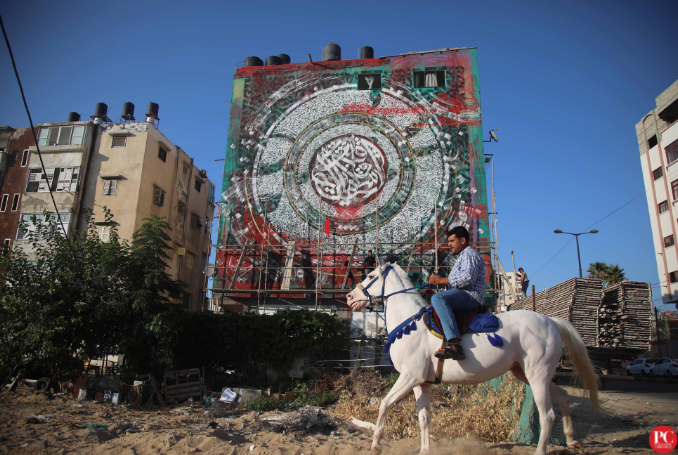 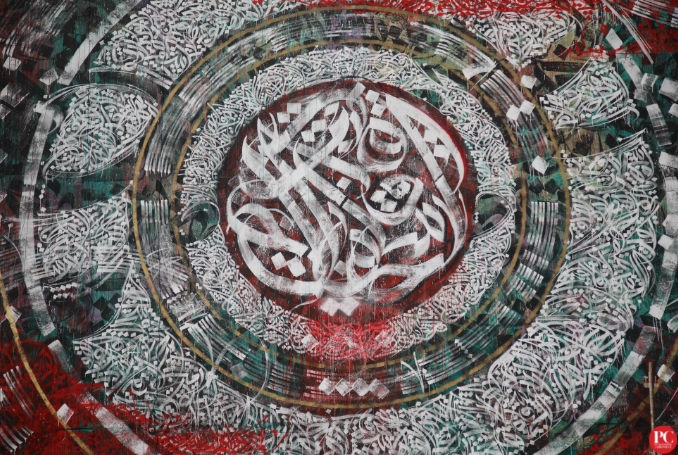 Expectedly, Khaled sees himself as a man on a mission. His keenness to promote the Arabic language and culture, along with the unique Palestinian identity, is palpable in all of his work. In fact, the young Gazan has taken his art well beyond Palestine to Kenya, Zimbabwe, Sudan, Somalia, Turkey, Belgium, Malaysia, Egypt, and Saudi Arabia.

Khaled told The Palestine Chronicle that whenever he intends to take on a project, he studies the area carefully with the hope of developing a specific understanding of the history of the street and the neighborhood, so that his art may continue to respect the legacy of the area. 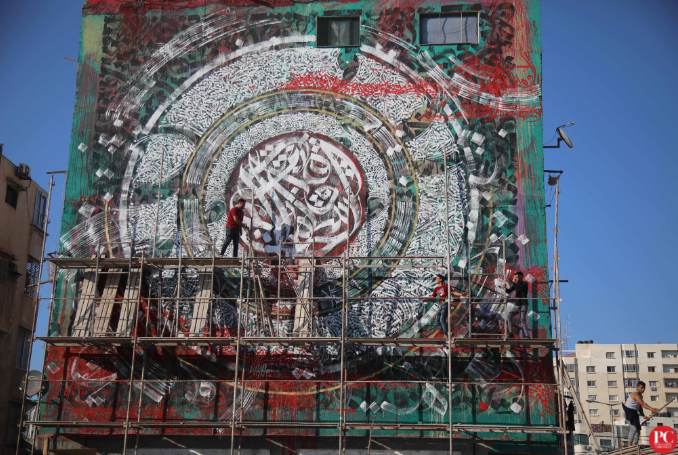 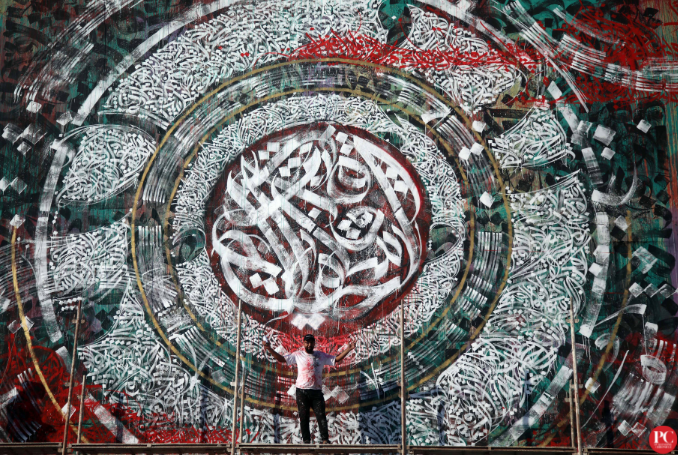 I joined Bilal Khaled as he worked on his latest street art in Gaza City. The Arabic calligraphy in the center of his latest painting reads “The Truth is My Weapon and I Shall Resist.”

The post ‘The Truth is My Weapon’: Bilal Khaled Reveals His Latest Masterpiece (PHOTOS) appeared first on Palestine Chronicle.

Rash of kidnappings continues a decade after Kenya joined the fight against armed group in Somalia.
Source: Jazerah